Is Sweden leading the way?

After the financial crises the European construction industry went down. It took until 2014 before total construction output began to increase again. At that point the industry was driven by new residential buildings. But when will non-residential construction take off?
Av: Bengt Henricson Postat: 2017-06-01 Ämneskategorier: Ekonomi Europa Nybyggnation Prognos

The European construction industry went through a couple of very tough years after the financial crises as new residential and non-residential construction (within the Euroconstruct 19 members) went down more than 40 percent. It took until 2014 before total construction output began to increase again and since then, it has mainly been new residential buildings contributing to the positive trend. 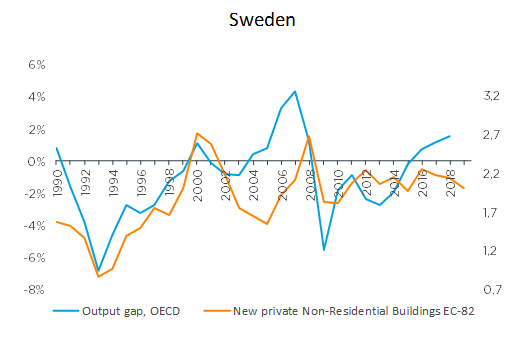 The development is a result of a steady, but weak economic recovery as well as strained public resources in many member countries. It will take some time until the economic growth reach a level were new investments in private non-residential buildings is necessary in order to increase the total capacity in terms of industry production and office, storage and commercial space. An average annual growth of merely 1.7 percent in new private non-residential buildings from 2017 to 2019 indicates that we will not reach that point for some time, (EC-82 November 2016) but what lies in store for us beyond this forecast period?

There is seldom any public initiatives directly affecting this sector of the market and investment decisions is based on the development of employment, private consumption, industry production etc. However, there are other forces emerging which impact on private non-residential buildings is yet to be clearly understood. We can get some insights by looking at countries were the economy has developed well enough to push the output gap above zero for some time and the conclusions are not all encouraging.

Historically, investments in new private non-residential buildings has followed the economic development with a peak in the building activity when, or just after, the output gap reach the highest point in the business cycle. This time we cannot see this tendency, in fact, investments even went down 9 percent in 2015 when GDP grew more than four percent. Last year, building starts went up, as expected, but we don’t foresee the building activity to reach a peak similar to the ones previously seen, most recently in connection to the IT-boom around the millennium shift and just before the financial crises. So what is happening? There are a few things worth mentioning.

The recent years of strong economic growth is unusual since it’s mainly domestically driven and a result of an expansive fiscal and monetary policy. As a small and open economy, Sweden has previously developed in line with the international demand for Swedish goods and services. Therefore, new jobs has to a larger extent than before been low-paying service jobs, partly as a result of stimulus measures like a 50 percent VAT cut for restaurants and a 50 percent tax deduction on household services. These jobs does not generate the same spin-off in service demands or office and industry space as new jobs in the traditional export industry do.

If we look at it with a longer time perspective, we are in the beginning of a conversion of the labour market many analysts claims to have an impact as profound as the industrialization. This time, it’s based on a new wave of digitalization enabling a more powerful and intelligent data processing in combination with gigantic amounts of information, (called “the second machine age”).

According to SFF (Swedish foundation for strategic research), around 450 000 jobs disappeared in Sweden between 2006 and 2011 due to automation in industry, trade and administration and 50 percent of all white-collar jobs is likely to disappear in the next 20 years, (revision, banking, control, monitoring and investigation services etc.). Problem solving tasks is also at risk and the only way to have a well-paid employment in the future is probably to get a job with a certain degree of creative experimental and innovative thinking. There are different opinions on how rapid this “second machine age” will develop and how many other jobs it’s going to create but it does not change the fact that a big proportion of the white-collar middle class as we know it will come under serious pressure.

At the same time, we see a continuous improvement of space efficiency through rationalization of industry production and inventory management. Today, a new office is built to offer roughly half the area per employee compared to an office built in the 80-ties. As the value of location increases, due to city densification and a grown importance of public transport, office and commercial buildings has to utilize properties in favorable locations optimally.

The ability to be more flexible and work from home, in another city, in your vacation house, at a client, when travelling or in office hotels, restaurants and cafés is merging workspace with both public and private space, which altogether contributes to an improved space efficiency. As a counter effect, properties in less favorable locations, with a limited modernization potential, or ability to transform to other use, is phased out.

Recent growth in population and private consumption usually create sound fundamentals for a growing demand of commercial buildings but new technology and changing consumer behavior forces retail chains to rethink. Last year, e-commerce grew 16 percent when traditional retail went up 1.5 percent. Swedbank expect e-commerce to grab 40 percent of the total retail market by 2024 and many retail analysts believes this year to be the first were e-commerce alone stand for the total growth in retail trade.

Some home developers has already embraced this development by offering solutions that enable large deliveries when no one is home. Nevertheless, new conditions also require investments, in IT-environments and efficient distribution, but also in buildings. Qualities like entertainment, restaurants and cafes plays an increasingly important role when choosing where to go shopping. New commercial buildings becomes larger and lavish in the same time as more than 80 shopping centers in Sweden are struggling, (mainly city malls and residential centers).

Future developments depend on country-unique conditions

Germany is a country, which seems to be in a similar situation as Sweden, were the construction of new private non-residential buildings has remained low and relatively unchanged despite an output gap above zero since 2014. But to be fair, we also have a good GDP development in combination with growing investments new private non-residential buildings in Hungary and Ireland. In addition, investments in new private non-residential buildings in Belgium and Switzerland has remained comparably high despite a relatively weak economic development since the financial crises. These differences and similarities shows the complexity in this transformation. Future developments will depend on the unique conditions that exists in each country, which highlights the importance of local knowledge and insights in regional differences.

So is Sweden leading the way?

In a short time perspective, (within our forecast period) Europe is diversified enough to generally say no. The industry climate has also improved in Sweden and office vacancy rates has dropped to very low levels in CBD areas. Things don’t change overnight in the construction market and the amount of new industry and office buildings might reach higher levels the coming years than we expect today. We may also underestimate the initial property investments required to be successful in a world were e-commerce dominates, automation has made your neighbor the air traffic controller unemployed and an average employee only spend one or two days per week at the office.

However, this does not change the fact that technical developments, consumer behavioral changes and the transformation of the labour market already has a negative impact on the demand for new private non-residential buildings in Sweden. The annual sqm building start between 2015 and 2019 expects to be only about 8 percent above the previous 20-year average, despite an unusually strong growth in population, employment and private consumption. We need to understand these driving forces because they are relentless, they will only grow stronger and national borders will not stop them.