Retrospective on a global health crisis that has deeply impacted economies

Global COVID-19 pandemic is having unprecedented impacts on the economies and sectors including the construction, and most governments took drastic measures to control the expansion of the disease. This article makes a retrospective on the pandemic first months impacts and provides an outlook on a quantitative methodology to estimate the recovery levels and dynamics
Till Euroconstructs blogg
Av: Prognoscentret Postat: 2020-08-04

The spreading virus has impacted world regions in different ways, both in scale and in timing. In 2020, the world is experiencing the worst pandemic since the Spanish Flu in 1918-1919, a 1-in-100-year event. The exact source of the SARS-CoV-2 virus, commonly known as COVID-19, is still unknown but all pieces of evidence point to a food market in the Chinese city of Wuhan, part of the Hubei province in central China. Its start as a new form of common flu, with coughing and fever symptoms, initially hid its true nature: a deadly pneumonia attacking first the elderly and those with comorbidity [1].

At time of writing, the epicentre of the epidemic has shifted to South America, with countries like Brazil and Argentina facing a full-blown spreading contagion as the number of additional confirmed cases keeps rising every day. But it has not always been this way. Indeed, COVID-19 has spread from its point of origin in China to other parts of the world in sequence. From China, the virus spread to the rest of Asia before moving to Europe on the first days of March with Italy. From there, the contagion spread to the rest of Europe before moving to the Americas, starting with the North, and ending in countries like Brazil and Argentina.

As a result of this unprecedent health crisis, governments around the world have taken various steps to fight off the spreading contagion. Theses public policy responses have been scattered across a wide spectrum, from most restrictive ones in countries like China or Austria to the most lenient ones in countries like Brazil. In between, governments have tried to balance restricting the freedom of their citizens (and the ensuing impact on their economy) with the duty of saving the life of those infected without overloading their healthcare system.

However, for most countries, the pattern has been similar:

To be more precise, these lockdown restrictions might differ in target (with respect to the
country’s borders):

The impact of the restrictions can be felt across a wide range of economic sectors but travel construction (as transport) have experienced the worst effect as they are the primary sector depending on lockdowns by countries.

Looking ahead: Le BIPE’s scenario to evaluate industry recovery in the mid-run

Our modelling includes three modules, one relevant to the COVID constraint, the second relevant to the resilience of each country (called Z score model, that factors structural capacities to face the crisis) and a specific construction module that calculate the results of these constraint/resilience on the industry. 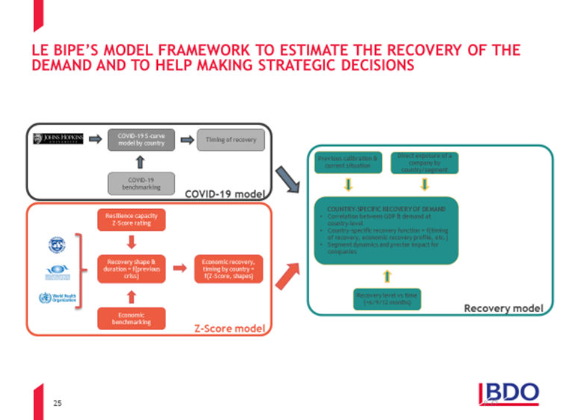 First of all, we developed COVID 19 models by country. These models are based on new cases flows and growth. We use S curves type to fit by econometry these data for about 150 countries. This enables the forecast of an end of the sanitary crisis by country. It is a first level of modelling, but as primitive data are to some extend non reliable enough (or subject to review by officials), this is enough for a first shot.

Second of all, we estimate the resilience of each country. This resilience is based on structural parameters such as economics, sanitary, sovereign risks and domestic dimensions. A quantitative Z score model is implemented, taking account of a dozen of parameters.

According to Z score, we are able to induce recovery shape and timing according to the economic literature; more than 122 past crisis have been reviewed to estimate the timing of this recovery on the base of IMF analysis; this background shows an average of 20 months (time to recover the same level of GDP) across all these crisis , with a standard deviation of 2 quarters. This may anyway be challenged by adverse scenario of the combination of both an economic and financial crisis. The level of the recovery is recalculated through elasticity by country and sectors according to long term patterns. Upon stabilization of the COVID-19 induced stress on each country’s healthcare system, construction will recover.

The resilience of countries to the crisis will impact the duration of the recovery during which construction will be substantially higher than the seasonal fluctuations normally observed. To evaluate this resilience, numerous factors have been considered: health infrastructure, dependence to the tourism industry as well as macroeconomic & geopolitical criteria. As a result, countries such as Germany or the United States are expected to recovery more quickly than Thailand, South Africa, or India for example.

Based on these two pillars, the construction outlook by country is projected, which can be consolidated into a global outlook showing the level of evolution over time.

We are currently working on multi variables triggers to best estimate the public arbitration between economic recovery, COVID cases, and political choices.

Footnote:
[1] Comorbidity refers to one or more diseases or conditions that occur along with another condition in the same person at the same time